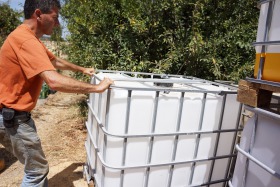 The IBC (Intermediate Bulk Container) is an easily obtainable polypropylene tank that is ideal for turning into a 1 m³ digester. Solar CITIES innoventors T.H. Culhane, Hanna Fathy and Mike Rimoin pioneered the use of used globally available IBC tanks for biogas systems in Cairo, Egypt in early 2009 and Solar CITIES has since built and led workshops and made improvements on these systems all over the world, building on porches, rooftops, backyards, laboratories and even basements of single family homes.

See main article about Solar C³ITIES IBC. The Solar C³ITIES IBC was developed by the NGO Solar C³ITIES, hence it is named after the NGO. Their innovataed the already existing IBC digester with technical upgrades, especially using Uniseals, bigger pipes and buckets for in- and outlet.

See main article about Sao Paulo System that uses 3 to 4 IBCs. Including a water storage that pressures the gas storage.