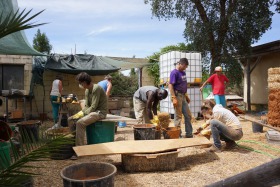 Biogas is a mixture of CH4 (Methane), CO2 (Carbondioxide) and H2S (Hydrogen sulfide). Its proportion varies but could be described generell as

Benefits of a biogas system

All nutrients goint into a digester are available in the effluents (expect for small amounts of sulfur releases as H2S and some N2 if the digester feed is unbalanced), thus providing a full spectrum of plant nutrients and reducing or eliminiating the need for chemical fertilizer input

With minor adjustment, biogas can be used in any way fossil gas is used

Pollutant emissions from combustion of biogas are similar to those from burning fossil gas,. When biogas is used to replace biomass or coal as cooking fuel, indoor air pollution and related health problems are greatly reduced

Volatile solids (what we smell) are largely consumed by digestion

Not attracted to digester effluents

Digesters, at near optimum mesophilic temperatures, with moderate solid levels (~8-12%) may be expeted to produce about 1 volume biogas per / 1 volume digester / day.