A kitchen which serves 150 people would like to use a biogas system. Question is: If Puxin are used how many reactors have to be created?

From the Indian experience we are told to assume that one cubic meter can very comfortably take the organic high energy waste (food residuals) from 4 to 6 individuals and create in turn about one cubic meter of gas. For this reason they call 1000 liter tanks the minimum size for a "family digester".  My own experience has been that two people (my wife and I in Germany) were often able to generate 200 liters of gas when the temperatures were high enough.  So I generally figure 100 liters of digester space per person. This would imply that every 1000 liters (1 cubic meter) could handle the organic residuals from 10 people.

By this reckoning a 10 cubic meter digester would accomodate 100 people's waste.  In Niteroi, Brazil, in the school we built digester's for with "Architecture for Humanity", we are planning on 90 to 100 students each day so we built a standard 10m3 digester for their food waste.  We should have results later next year on the performance, but Puxin company verified that this size would be sufficient (we also built two 4 cubic meter digesters in series to handle the toilet wastes and did not connect them to the food waste digester).

The normal figure quoted is 25 liters of mixed food waste and water per cubic meters of digester space.  That is based on a 40 day retention time and the idea that you can feed a digester 1/40 of its volume with organic material. But these figures are based on animal manures.  See http://collections.infocollections.org/ukedu/en/d/Jr0048e/14.5.html

25 liters is a bit more than the size of a 5 gallon paint bucket worth of food.  So the real question is "how many buckets of food waste do you get per person"?

For a kitchen of 150 people one could argue that the best option would be to take the Solar C³ITIES modified Puxin molds (which let you build 4, 6 or 10m3 tanks using the same molds) and build one 10m3 and one 6m3 system (you could do one 10m3 and one 4m3 also, but bigger is usually better if you have the vertical space and the extra cement).  This would easily work (and would take you 10 days -- 5 per digester).  If you expect to grow you might want to go ahead and, since you are using the molds twice anyway, build two 10m3 digesters side by side.  Then you would know you could accomodate up to 200 people.

There is, however, no harm in building a single 10m3 system and running it for a year and seeing how it handles the food waste.  In the beginning the digester is going to go through an adjustment phase and needs to start up slowly, taking perhaps half of its maximum capacity in the beginning, once it starts making flammable gas, and working up to the maximum over a few weeks.  In this sense loading a digester is like what the Chinese say about cooking in a Wok -- how do you know at what point you will burn the food? You need to cook until "just before it burns" -- which means once or twice you need to burn the food to get a feel for it! So you could run the system for a year and get a sense of how many times, if at all, you ended up overfeeding it and making it go acid.  To recover from an acid event (indicated by pH paper, by a sour smell in the slurry and by production of inflammable CO2 gas) you would balance with lye and add more manure and wait a week or two for the methanogens to recover.  Over the year (or even over some months) you would know if the size capacity was too small. Then you could borrow the molds again and build a second tank. It may well be that a single 10m3 tank can handle the output of your 150 people because we will be putting vertical surface area improvements in the tank and the figures are generally for tanks that have nothing inside but the water and slurry.  The more biofilm you can form the more food it can take.

Much of this work is experimental so we need partners who are willing to do the "animal husbandry" that this art and science really is.  For those who are insecure and don't want to play with the paramaters, be conservative and go bigger -- build two tanks.  It won't hurt you. You can feed half the food to one and half to the other based on the idea of 25 liters of waste per cubic meter tank space.  But it will cost you more than building just one tank of course.

Ah, decisions decisions.  Cost/benefit ratios. This is an art as well as a science and we are creating literally living organisms.  Every one will ultimately be a bit different depending on how healthy you create it.  But if you only build one, look at it this way -- you can compost the rest of the food anyway, or you can save extra organic waste from a day when a lot of people ate for a day when not so many ate.  Either way you be turning it into very fertile soil. 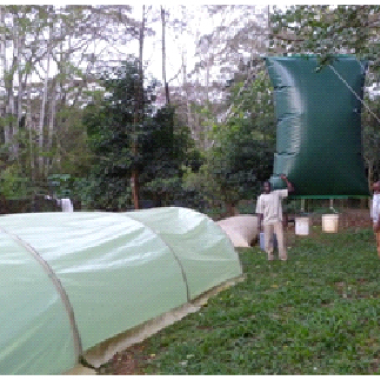