Why is this guy smiling?

Because the Permaculture Movement in New York has embraced the Solar CITIES Biogas Movement and joined forces with us to build the state's first community scale biodigester (a Solar CITIES variant of the 6m3 Puxin cement system).

The "wet build" installation occured the during the third week of June, 2015 at Andrew Faust's "Center for Bioregional Living" a mere two weeks after we brought the molds up from Pennsylvania and did a "dry build" training in the parking lot to show the community what mold-based DIY biodigester systems are all about (assembly and disassembly of the molds) and spec-ed out the location for the best place to do the pour.

We decided on a 6m3 system when digging last week with a backloader revealed that we could only go down 7 feet before the water table turned the hole into a pond.

To fill in the rapidly waterlogged bottom of the hole we had to make a square out of 1 x 6 boards into which we  piled rocks, wooden boards and gravel onto the swamp of mud until we could lay down sheets of rigid blue foam and then line the whole thing with sheet plastic.  Then we put in reinforcing steel mesh and brought in a truck to pour cement.

This resulted in a base slab of 5 inches above a good six inches of material on top of the rocks and gravel, giving us less than 6 feet of depth to work with.

Since a 10m3 system stands at about 9 feet we had to leave the 4m3 ring out, decreasing the height by 16 inches to about 7 foot 8 inches, and given the height of the sewer pipes coming out of the house, which stood a mere foot and half from the ground level, we realized that   a six cubic meter system was the tallest we could go and still permit passive drainage of kitchen and toilet wastes into the tank.

This particular build will be integrated into Andrew Faust's Permaculture Design Certificate courses at the Center for Bioregional Living.  It will take all of the food waste from the Insinkerator Evolution 200 that we had donated to his center, plumbed into the main sewer pipe, as well as all grey water and toilet wastes.

It will be insulated with soy based Polyurethane donated by Lee Stoltzfus from Foam-Tech Insulation (see http://www.demilec.com/Blog/2011/October/Featured-Contractor-Lee-Stoltzf...) and data will be collected for winter performance. 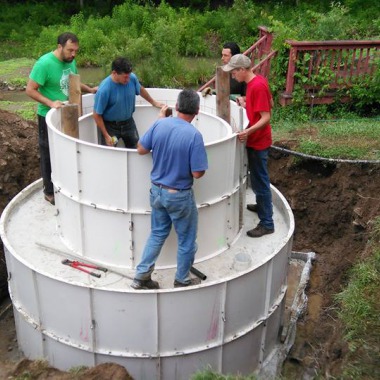