The Selinda system was sized to accommodate the kitchen waste from a maximum of 16 guests eating 4 meals a day. Culhane spent two days during a period of full occupancy grinding the waste generated through meal preparation and plate scrapings through the Insinkerator LC50 generously donated by Emerson Electronics and determined that each meal (breakfast, lunch, tea and dinner) generated approximately 2 25 liter buckets of slurry (food waste ground up with water). Calculating that every 25 liters requires approximately 1000 liters of digestor space (based on estimates by ARTI India whose telescoping systems we have been replicating) we decided that we needed about 8000 liters. Because of cost considerations we decided that we would try wedding a 5000 liter sealed tank as primary digestor to a 2500 liter telescoping system (with a nested 2000 liter gas collector) as secondary digestor to give us approximately 7500 liters of digestor space. We also placed at least four vertical 110 mm sewer pipes inside each of the digestors to increase surface area for biofilm formation (also allowing the bacteria to inhabit different thermocline zones). The digestor system is made so that the primary digestor spills its overflow into the secondary digestor which has the telescoping gas collector in it. We observed that some of the food slurry the insinkerator puts out sinks and some floats and the theory is that some of the food entering the primary digestor will spill over into the secondary digestor. Gas created in the primary digestor flows from a 1/2" plastic tube into the gas collector and gas created in the secondary digestor directly raises the gas collector. Hence both tanks were filled with septic tank sewage sludge as starter culture. Note there is no smell or presence of flies or vermin associated with the open telescoping digestor and it is safe enough for small children to play around.

Here we display photos of our latest design for larger capacity biodigestion, utilizing a larger sealed tank as the primary digestor (mimicking a Chinese fixed dome system, but out of plastic) connected to a secondary digestor/gas collector setup in the ARTI India style. The challenge in Botswana was creating the telescoping digestor out of two tanks with a similar diameter. To our chagrin, when the 2500 liter and 2000 liter tanks we ordered arrived, we discovered they both had the same diameter! At $330 and $300 respectively, with no alternatives and time running short, we figured that God was challenging us to come up with a solution for people who have similar problems (we've never had this situation before). So we are running a very expensive experiment: we cut the 2000 liter tank into 4 sections, taking 8 cm out of each side. Now we are reassembling the tank by heat welding the pieces back together. It takes about 2 days with 3 people working, one using a heated trowel to patch gaps with the trim strips we removed, one using a heated angle iron to melt the strips and bind them, and another working inside the pieces with a large soldering iron, filling gaps. But it seems to be working! 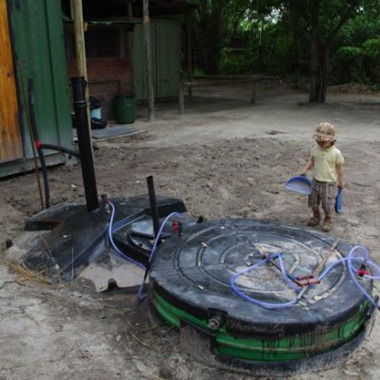